A view of Monk's Mound, the largest mound in the Cahokia Mound state park, which was a temple. We are standing at the far end of the Grand Plaza.

Sparing a thought for the jade plant wilting in the backseat, we stopped for lunch at a “family restaurant” in Belville, Kansas on the edge of town. We forsook a picnic lunch for two reasons. One, for an area with so much land, none of it was for public enjoyment and two, in a new place I am compelled to be among people who call it home.

Sit anywhere, a young woman indicated. A dining room to the right and the left. On the right, plastic tables and what may possibly have been the entire retired community of the town, in parties of one and two, for a total of seven. That room was crowded. On the left, an empty room save for a couple in the corner. Wooden tables. Mom heads to the right, through open stares and uninhibited curiosity toward a table for six; I turn left. “You’re both going the other way,” a grandmother chuckles. I smile and suggest to Mom we take a smaller table in the other room. All heads turned to follow our progress.

There is no denying that we are out of place. We are not of this town and this restaurant does not get many outsiders, as evidenced by the parties that entered after us. A group of young men who work in construction, pouring concrete. Two sunburnt farmhands, in cowboy hats and plaid shirts. Before they sat down, the waitress had their sodas ready.

There is also no denying that we are the only non-white people in the dining area. It contributed to the spectacle we seemed to carry with us throughout the day we drove through Kansas. We were always treated with courtesy but it was uncomfortable.

The thing about being “the only” something is that you suddenly bear the burden of judgment. How you act and acquit yourself will be noted by everyone in the room and marked as “this is how so-and-so type of people act”. I have had the unique pleasure of being the recipient of this behavior in two very different cultures. It’s not such a prevalent phenomenon in China now, but from the first time my parents brought me as a baby, I was a spectacle. So was my dad. Can we take a picture with the American? We don’t care anything about who you are as a person but we want to use your image to brag to our friends. Can we look over your daughter like a specimen and pronounce her too this or not enough that? The visceral reaction of a child is to ask, Why me?

And then I got it on the American side. At school, I was supposed to be able to answer any question about China. To speak on behalf of 1.2 billion people who communicated in a language I did not understand. It was unfair: to me, to the culture I was supposed to represent, and to the people asking the questions.

I understand that for many of the people I was around, in China and in the States, I was one of the first “other” person they met. I understand that elicits a natural curiosity and that it is not necessarily ill intended. But it is a burden on the individual who must bear the stares and the questions about heritage that other folks never get asked because it is taken for granted that they are an individual and don’t represent the home of their grandfathers.

I’m writing this because both my mother and I are seeing parts of the country we have never known, experiencing differences in local culture and seeing them celebrated. I can only convey our experience as truthfully as I know how. On the one hand, every place we stop has made us prouder of our country. This land is beautiful. Its people are beautiful. Its diversity in all forms is truly her strength. On the other hand, we have been made to feel uncomfortable by shocking the inhabitants of a restaurant, a gas station, with just our presence and that troubles me. As it troubles me that this undercurrent of racial superiority has broken back out into the mainstream. That as a society, we have neglected the education of some of our children such that they feel comfortable walking the streets as self-proclaimed Nazis because they were not taught that humans share 99.9% of their DNA (more than most other species), that we all bleed easily, that the pie can grow, life is not a zero-sum game, and that our choices have consequences. It troubles me that they were born into a society that celebrates the freedom of choice but they somehow learned to blame others for their problems and fears.

Yes, on this journey so far we have had a few instances where our status as outsiders of the community has blended with our “exoticness” to make us spectacles in our own country. How could we pass through this country without confronting race at some level?

We have seen other things that concern us. We have passed through poverty stricken areas and asked ourselves, where are the grocery stores? Where is the fresh food? Why are there no children playing outside?

But we have mostly been met with friendliness from people of all stripes. They have welcomed us into their community and wanted to share it with us. We have seen communities brought together, our common passions passed around for all to take part in. Upon reflection, I note that these moments of community building were prompted by art, history, and science. At least 5,000 people on a Sunday night in Kansas City shared their love for Whitney Houston by coming out to watch a Broadway tour of The Bodyguard. People walk in the footsteps of an incredible Native American civilization at the Cahokia Mounds State Park in Collinsville, Illinois. Every day (according to the log book), someone stops at Alcove Spring in Blue Rapids, Kansas and shares a moment with the spirits of those who left their homes and made their way on the Oregon Trail in pursuit of a better life. Corn grows, in undulating waves like the sea.

I don’t profess to any answers and I don’t expect others to find these words meaningful or even helpful, only that our journey so far is only reinforcing my conviction to travel through life respecting individuality and exhorting our shared humanity. 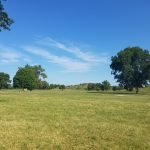 A view of Monk’s Mound, the largest mound in the Cahokia Mound state park, which was a temple. We are standing at the far end of the Grand Plaza. 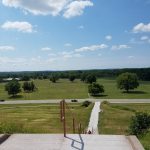 From the top of Monk’s Mound, looking over the Grand Plaza. 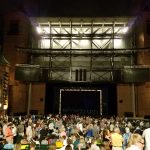 The crowd gathers for the last performance in town. 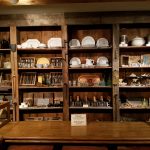 Displayed as if at the department store, artifacts from the steamboat Arabia. 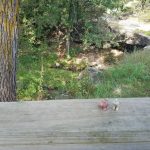 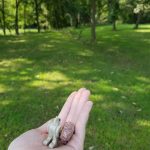 On the Oregon Trail at Alcove Spring in Kansas.

Where all my Amazon packages came from.