Crossing into Utah from Colorado was not a momentous occasion. A straight road through an open landscape with no discernible environmental differences. In fact, the point of going to Vernal, UT, our next stopping point, was to visit Dinosaur National Monument which straddles both states.

No, the border was not momentous but the landscape was.

Dinosaur National Monument is famous for, you guessed it, DINOSAURS. Fossil deposits were discovered by Earl Douglass, a paleontologist in 1909. The 80 acres surrounding the dinosaur quarry was designated a national monument in 1915 and expanded in 1938 to 200,000 acres to protect the canyons of the Green and Yampa river and also to encompass other facets of geological and cultural heritage. 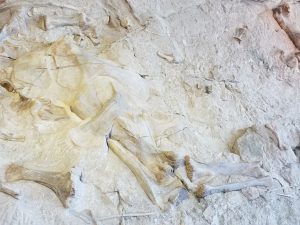 We start with the dinosaur quarry. An air conditioned structure was built over the cliff face, allowing visitors to spend as much time gazing across the fence, picking out as many fossils and trying their hand at in-situ bone and species identification. Rangers line the hallway, giving talks for adults and for children. 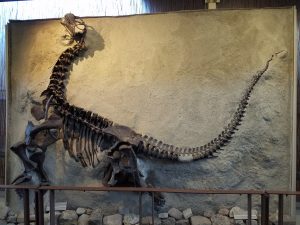 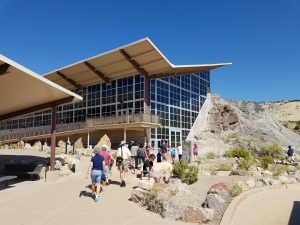 On the bottom floor, you can walk up to the cliff face and feel some of the embedded fossils. Casts of some of the biggest finds are on display.

And then we moved on to my main attraction: sites of human activity! 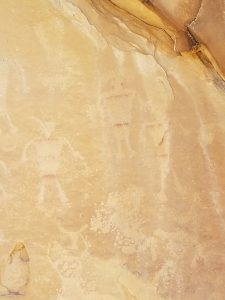 Following the auto road tour (and stopping at every single pullover), we made our way to a site where stone tools were found, dating back 7,000 years. Pictographs and petroglyphs by the Fremont people were painted and carved on the shelter wall about 1,000 years ago. This was just a taste of the wall art we would see.

Lunch at the Split Mountain picnic site, where we learned about the geological processes that formed the landscape we see today. Split Mountain, so called because the Green River seems to split the mountain’s dome in half, was the subject of much debate. Water’s natural course would be around the mountain, not through it.  50-60 million years ago, the Uinta mountains, of which Split Mountain is a foothill, were created. This was the same time as the formation of the Rocky Mountains, by the way. The Uintas were a lot higher and over the course of tens of millions of years, shed rock and dirt that was deposited in the foothills by ancient rivers. Split Mountain was completely buried. The Green River began to flow, cutting into the deposition and eventually into the dome of Split Mountain. 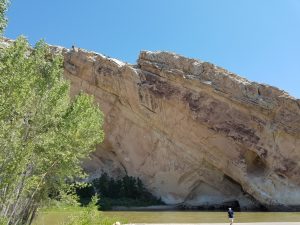 We finally made it to the petroglyph stop I had been waiting for. The trail rises quickly and it is surprising how sharply the petroglyphs appear, even from halfway up the trail. The picture doesn’t do justice. 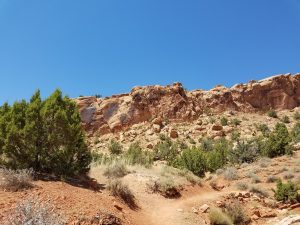 Up close, the immensity of the undertaking overwhelms. You are standing on a rather sheer cliff edge, looking up at images carved into the stone, high, high, high up. And ask yourself, how? 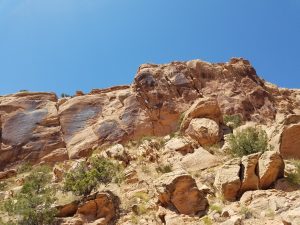 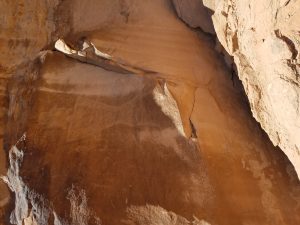 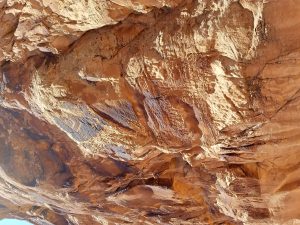 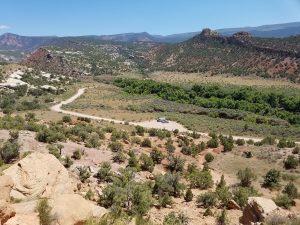 That speck in front of the van is Wolf Mom.

The auto road ends at the Josie Bassett Morris homestead, the home for 50 years of a remarkable woman. She built her first cabin in 1914. The one you can walk through today was built in 1935. After 5 marriages, she lived, provided for herself, and ranched alone, also raising pigs, chickens, and geese and keeping an immense vegetable garden. She used the surrounding box canyons as natural fences for her cattle. By all accounts we came across, she was happy until the end at age 89. 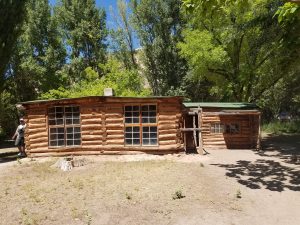 It was a surprise to end the day we thought would consist of the super ancient and ancient with the history of a pioneering woman, but it was well met. And although we would spend another day in Utah, biding our time until the eclipse, Dinosaur National Monument was the highlight.

On a Monday, Time Stood Still.